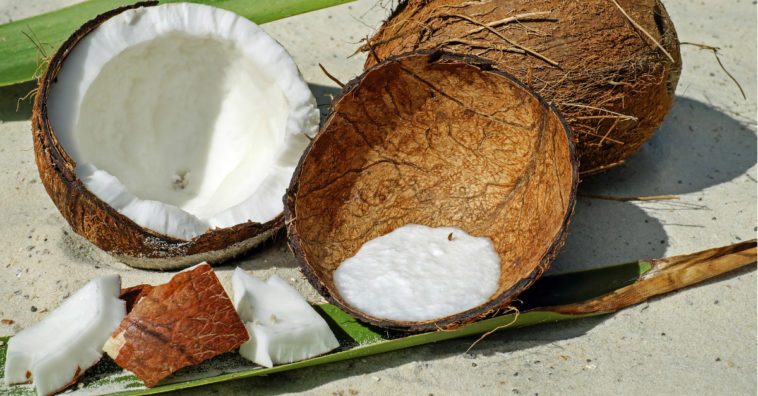 Coconut milk doesn’t profit from the same level of fame as its close relative coconut oil, but it’s slowly getting there.

This vegetal milk is made by mashing the white flesh of mature, brown coconuts and mixing it with water in equals parts Since the fruit is directly used in its preparation, it’s a much more nutritive option than coconut water which occurs naturally within a green coconut but it’s composed of 94% water.

Benefits of coconut milk for health

This vegetal milk is very nutritive presenting interesting amounts of minerals like magnesium, potassium, selenium and manganese, as well as vitamin C and fibre. It is also high in calories compared to other similar milks, with once cup of 240ml containing approximately 552 calories.

Nevertheless, almost 93% of those calories come from fat, including the medium-chain triglycerides (MCTs), the saturated fat so adored by fitness athletes and body builders.

It’s this nutritional profile that gives raises to the benefits of coconut milk.

Even if coconut milk is high in calories compared to other types of milks, its nutrients help turning the table around and make it a good ally for weight loss.

MCTs, the kind of fat coconut milk is rich in, don’t get processed by the body in the typical way. Instead, after digested, they are immediately taken to to liver to provide energy, thus avoiding the danger of becoming becoming stored fat.

The same MCTs that can help you lose weight also support a healthy heart.

These fatty acids are “good” fats that help balance the cholesterol levels in the body. Moderated amounts of these fats help decrease LDL (“bad”) cholesterol levels and increase the HDL (“good”) ones. Thus, coconut milk can help prevent cardiovascular problems and keep the heart healthy.

Nevertheless, it might not have a positive effect on everyone. The main fatty acid in this milk is lauric acid, which, depending on the individual, it can raise the LDL cholesterol levels by suppressing the receptors that clean it from the blood.

If you struggle with your cholesterol levels, caution is advised.

Coconut milk can also benefit the body in other ways, but to a smaller degree and sometimes indirectly. However, in most cases these benefits are considered preliminary as they have yet to be tested with human subjects.

Ulcers: according to a study from 2008 performed in rats, a daily intake of 2ml of coconut milk can reduce ulcers and their symptoms by 54%.

Benefits of coconut milk for hair and skin

The fat content of coconut milk can have an anti-inflammatory effect when applied over damaged skin.

Not only will it help soothe the itchiness, pain, redness and general discomfort in the burnt area, it will also promote its healing by cleaning the wound and provide it with nutrients to replenish itself.

The anti-bacterial effect of lauric acid can also help treat acne. This acid cleans the skin and eliminates the bacteria, treating any existing pimples in the process.

You can apply it directly over the face or mix it with peeled almonds until getting a consistent cream you can use as a beauty mask for 15 minutes, 2 or 3 times a week.

Since fatty acids have an antiseptic effect, coconut milk can help soothe rashes, itchiness and inflammation of the scalp. Likewise, it’s moisturizing power due to its nutritional content help replenish the skin to make it elastic and healthy again.

By taking care of the wellbeing of the scalp, the coconut milk will also promote hair growth and its strengthen given it had a solid base to grow from.

Besides helping with growing new healthy hair, coconut milk can also help restore the existing damaged one. Due to its moisturizing and nutritional properties and the fact that can be easily absorbed by the hair follicles, this milk can replenish the weaker hairs and even fix split ends.

Coconut milk doesn’t have any side effects that stand out. It’s considered quite safe for consumption unless you have an allergy to this fruit.

If you have never tasted before or do it very scarcely, it can also provoke diarrhea, gas, bloating and nausea. Moderate the intake in these cases until your body adapts to the incoming nutrients. If it persists, stop any intake and visit a doctor to check what might be causing the discomfort.

Lastly, some brands of coconut milk might include bisphenol A (BPA). This is not a component of the milk but rather of the cans themselves that can transfer to the food. This chemical has been associated with reproductive problems and cancer in animals. Look for brands that have the indication of BPA-Free on their labels.

Now that you know which are the benefits of coconut milk, you might feel curious about trying it out. You can drink the milk directly or use to prepare your breakfast, just like you would do with regular cow milk.

However, you can also enjoy this drink by preparing tasty and rich meals. Try out the following recipes to taste the versatility of coconut milk.

1. In a large pot, heat up the vegetable oil. Add the ginger, lemon grass and curry paste and let them cook while stirring for 1 minute.

2. Still stirring, slowly add the chicken broth, the fish sauce and the brown sugar and let it simmer for 15 minutes.

3. Pour the coconut milk and add the mushrooms. Stir it well and let the mixture cook for about 5 minutes or until the mushrooms are soft.

4. Stir the shrimp in and let it cook for about 5 minutes.

5. Add the lime juice and salt to season it. Garnish with cilantro and serve.

1. Start by cutting the beef into 1 ½-inches pieces. Slice the onions thinly and cut the potatoes into 2-inch pieces.

2. Warm the oil over medium-high heat in a large heavy pot. Season the beef generously with salt and start cooking it, turning occasionally. It should take around 8 to 10 minutes for the meat to be fully cooked and deep brown. Removed from the heat and reserve.

3. Using the same pot still warming over the fire, remove all the fat from the beef and the oil except for one tablespoon. Add onion, ginger, garlic and butter and cook in medium heat, stirring constantly until the onion gets translucent (aprox. 5 minutes).

4. Keep stirring and add the curry. When it starts to stick to the pot, add the coconut milk, 1 cup of water and the bay leaves.

5. Place the beef in the pot again, season it with salt, and let it cook, partly covered, for about 30 to 35 minutes or until the beef is fork-tender.

6. In the same pot, add the potatoes, bring it to a simmer and let it cook together with the meat for about 25 to 35 minutes. Stir occasionally. Season with salt and add more water if needed.

7. Serve with the steamed jasmine rice, the chile and the lime wedges.

Coconut milk is a tasty alternative to the traditional cow milk and a very nutritive one at that. If you want to enjoy its benefits both for health and beauty, but are afraid of possible harmful components from the cans, don’t worry. You can make your own milk easily at home and guarantee it’s as organic and healthy as it gets. Check out three methods to make this milk at home in the following video: